Real Madrid takes the lead with three strikes for Barcelona 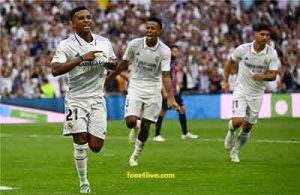 Real Madrid grabbed the top of the Spanish League, today, Sunday, winning 3-1 in the Clasico against traditional rivals Barcelona, ​​in the ninth round of La Liga, in the Meringue stronghold, “Santiago Bernabeu”.

Scored for Real Madrid: Karim Benzema, Fede Valverde and Rodrygo, in the 12th, 35th, and 91st minutes, while he scored for Barcelona: Ferran Torres in the 83rd minute.

With this victory, the Royal team returned to the top of the League with 25 points, while Barcelona froze at 22 points, in second place.

The match began with a threat from the visitors, through Rafinha’s shot from outside the penalty area, which Andrei Lunin, Real Madrid goalkeeper, caught easily in the 5th minute.

Karim Benzema scored the first goal, in the 12th minute.

And that was by a counter-attack, during which Toni Kroos passed the ball to Vinicius, so that the latter set off and was unique to goalkeeper Ter Stegen, who blocked the Brazilian’s shot, to bounce the ball in front of Benzema to put it in the net.

Barcelona striker Robert Lewandowski missed the opportunity to score the equalizer in the 25th minute, when he received a cross from his colleague Rafinha near the goal, but he shot with excessive force over the crossbar.

Fede Valverde added the second goal for Real Madrid, in the 35th minute, with a ground shell from the edge of the penalty area, which settled under the right of Ter Stegen.

Barcelona midfielder Frenkie de Jong hit a ground ball that Andrei Lunin saved, and turned it into a corner in the 37th minute.

At the beginning of the second half, Benzema passed a ball to Toni Kroos, who shot from the edge of the penalty area above the horizontal bar.

In the 52nd minute, Benzema scored a goal for Merengue with a wonderful shot, but the match referee canceled it for offside.

The substitute, Ansu Fati, fired a powerful ground missile, which passed near the left post of the Real Madrid goal, in the 77th minute.

Ferran Torres, a Barcelona player, managed to reduce the difference in the 83rd minute.

That’s when Fati ran on the left side, and passed a dangerous cross that Lewandowski touched, but it did not go towards the net as he wanted, to reach Torres, who scored it against Real.

Fati almost added the second goal for Barcelona in the 87th minute, with a double shot that passed by the left post.

And the match referee decided to award a penalty to Real Madrid, after referring to the video technology, after a violation by Eric Garcia against Rodrygo, who set out to implement it himself, and scored down the left of goalkeeper Ter Stegen, in the 91st minute.

This goal killed Barcelona’s dream of Rimontada, and secured the three points for Meringue.