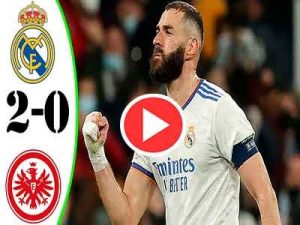 end of the match

Minute (87): timid attempts by Frankfurt amid a decline in terms of Real Madrid.

Minute (85): 3 substitutions for Real at once, with the exit of Vinicius, Kroos and Carvajal, and the descent of Ceballos, Chuamini and Rudiger.

Minute (81): Real Madrid’s quick counter-attack reaches Kroos, who shoots hard, but his ball passes next to the post.

Minute (70): A new substitution from Frankfurt, with Toure leaving and Alario landing.

Minute (65): Gooooooool .. Benzema adds the second goal for Real with a strong shot after receiving a pass from Vinicius inside the penalty area.

Minute (61): The crossbar saves Franfcourt from the second goal after blocking a missile shot from Casemiro.

Minute (55): Mendy sends a cross to Vinicius, who hits the ball, but his ball hits the defense and then Trapp stops it.

Minute 51: A quick run from Lindstrom on the right side, but Casemiro saves the ball at the end.

Minute (50): Calmness at the beginning of the second half, without attacks on goals.

beginning of the second half

The end of the first half

Minute (42): Real Madrid continues to pressure .. A shot from Benzema hits the defense, then a powerful shot from Casemiro was blocked by Trapp.

Minute (41): Benzema missed the opportunity to add the second goal after receiving a magical pass from Kroos, but he shot outside the goal.

Minute (38): Jules .. Real Madrid advances the first goal through Alaba after a wonderful prelude by Casemiro with the head following a corner kick.

Minute 37: Vinicius Junior runs from the left side and penetrates the center of the Frankfurt players and hits hard, but Trapp saves the ball.

Minute (34): Intense pressure from Real Madrid in search of a goal to advance before the end of the first half.

Minute (24): Frankfurt launches a new attack on Real Madrid and Militao saves a cross at the last minute, then Courtois saves a powerful shot.

17th minute: Real Madrid responds with a quick attack that starts from the start of Valverde, who passed the ball to Benzema to pave it to Vinicius, who shot in an elegant way, but Tota saved it from the goal line.

Minute (14): Courtois saves Real Madrid from a real goal after blocking Kamada’s shot from an explicit one.

Minute (10): possession of the ball by Real Madrid, but without real effectiveness.

Minute (5): Calmness at the beginning of the match and balls cut from both sides without any serious attacks on the two goals.

start of the match