Real Madrid without Benzema.. A daunting task for Ancelotti’s team 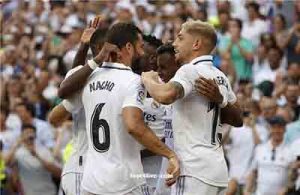 Impossible mission for Real Madrid, tomorrow, Sunday at nine in the evening, face to Atletico in the capital’s derby, in the absence of French striker Karim Benzema, one of the main pillars of the team. Without him, the Meringue played 26 games, achieving 16 victories, 4 draws and 6 defeats.

Benzema had felt trouble in his right knee during the match against Celtic in the Champions League and things seemed to be not going well, and indeed, he was diagnosed with a double injury to the muscle and the right knee, and it is likely that the Frenchman will return to the team after the international break on the second of October Next first in front of Osasuna.

Real Madrid has so far been able to remain without Benzema thanks to the brilliance of Uruguayan Fede Valverde and the Brazilian Rodrigo Goes, as well as the high level of Vinicius Junior to outdo himself after his legendary performance last season.

In the absence of Benzema, Real Madrid beat Celtic 0-3 (the result was a 0-0 draw until the moment he was injured), Mallorca 4-1, and Leipzig 2-0. A pattern that does not apply to all the matches in which the Frenchman missed Real Madrid in previous seasons, but it provides positive indicators, although the numbers do not reflect everything.

For example, Real Madrid won without its most prominent star over Inter Milan and Elche, but drew against Villarreal and Cadiz, while losing to Atletico Madrid, Barcelona and Athletic Bilbao. A total of five wins, two draws and three defeats.

However, each match has its own circumstances, while the loss against Bilbao is an embodiment of the impact of Benzema’s absence when Isco Alarcon was forced to play as a fake striker due to the lack of alternatives in front of coach Carlo Ancelotti.

The Merengue players admitted, after the defeat at the hands of Barca, that they entered the match with an excessive feeling of confidence due to the 12-point difference in La Liga, and the lack of motivation was clear from the first minute, and the result was 0-4 for the Blaugrana, although the defeat did not affect the course of things in the league nor the destination of the shield. .

And the last meeting that Real Madrid played without Benzema last season was the Madrid derby, after Real won the League and a few days after reaching the Champions League final after another historic remontada. The Italian Carlo Ancelotti made wide changes and lost the Real Madrid with a clean goal.

However, the motive factor will be completely different tomorrow, Sunday, and it will be a strong challenge for Real Madrid in the absence of Benzema and for his colleagues, who will certainly work to ensure that they are not affected by his absence.

And Ancelotti had revealed from the first moment in the pre-season, which Benzema joined a little late, that his first option to compensate for the absence of the French would be to push the Belgian Eden Hazard as a fake striker, in an attempt to bring the player back into the game after several injuries over the past three years. Since his arrival at Real Madrid, he has regained the luster of one of the world’s best players.

Given Vinicius’ tight control on the left front, Hazard moved away from his original position, prompting Ancelotti to search for alternatives, but the matter did not work, although he scored a goal and made another against Celtic, but he is still far from continuity and has played only 158 minutes since the beginning of the season.

And he appears in the same position sometimes, the brilliant Rodrigo Goes, although he prefers to play on the right side and has a high scoring sense, even if he did not get many minutes this season. The Brazilian starred against Mallorca with a superb goal when he manipulated the opponent’s defense inside his penalty area, as well as creating another goal, but he still has not celebrated yet in his favorite tournament: the Champions.