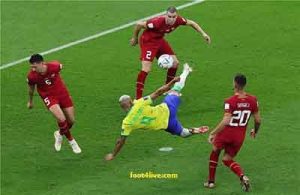 The Brazilian national team started its campaign in the World Cup in Qatar, with a deserved victory over its Serbian counterpart (2-0), today, Thursday, in the first round of Group G.

The Brazilian national team owes credit for this victory to its player Richarlison, who scored two goals in the two minutes (62 and 73) of the match that was held at Lusail Stadium.

The first minutes of the match passed without any danger, then Pavlovic got the first yellow card after a strong intervention on Neymar in the middle of the field.

Casemiro passed a wonderful ball to reach Neymar inside the area, but the latter failed to hit it after the Serbian defense succeeded in saving the situation and dispersing the ball.

Neymar almost deceived Milinkovic, after the Brazilian star executed a corner kick towards the net, the Serbian goalkeeper shone and pushed it away from his goal to a new corner.

Casemiro, the middle field of the Brazilian national team, fired a missile shot from outside the penalty area, which the Serbian goalkeeper managed to save twice.

And Vinicius got a magic pass from Thiago Silva, hitting the Serbian defense to clear the goal, but the brilliant Fania came out of his goal and brilliantly pushed the ball away.

From inside the penalty area, Brazilian winger Rafinha fired a ground shot with his left foot, but it was not strong enough to enter the net and reach the arms of the goalkeeper.

Defender Milinkovic tried to clear the ball, but it hit Vinicius’ face, controlled it and penetrated, but he shot wide of the goal, to end the first half (0-0).

Only 35 seconds after the start of the second half, Rafinha failed to take advantage of a joint mistake between Fania and Godel, to shoot Rafinha, but the Serbian goalkeeper managed to save her.

Defender Pavlovic shone, and saved his own goal from a goal opportunity for the Brazilian national team, after an excellent pass to Rafinha, who almost scored the last goal.

And the Brazilian deluge continued, and Vinicius passed a cross pass into the area, to be met by Neymar from in front of the six-yard area with a shot that passed near the goal.

And the right post stood in front of a missile shot by Alex Sandro, who fired a missile from a distance, hit the post and passed outside the area.

After a ball, Neymar passed it to Vinicius, who shot and was blocked by the Serbian goalkeeper, but it rebounded from him and Richarlison followed it up with a shot from inside the six yards into the net.

After a corner, Tadic executed it, and Milinkovic met it with a header and the defense dispersed it, and it reached Savic, who passed it, but Marquinhos pushed it out of the area.

Casemiro almost added a third goal to Samba in the 81st minute, after the Brazil midfielder fired a missile from outside the area, hitting the crossbar.

Rodrigo, who came on as a substitute in the second half, threatened Fania’s goal with another shot into the net, but the goalkeeper shone and saved his goal from the chance to increase the score.

The Serbian goalkeeper returned to continue his brilliance in the match, and prevented a new goal after Farid received the ball and fired a powerful shot with his left foot, which the goalkeeper pushed to a corner.

Anthony passed perfectly on the left side, to pass to Rodrigo on the edge of the penalty area, and fired a shot that passed over the crossbar, so that Brazil won (2-0).