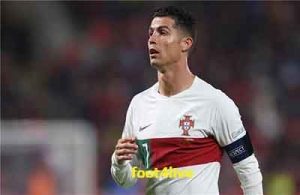 Ronaldo posted, on “Twitter”, his picture celebrating one of the match goals, and wrote on it: “A great match .. an important victory for the team, we are still focused on our goal .. Thank you to the Portuguese fans for the wonderful support.”

Ronaldo suffered a severe facial injury during the match, after he fell to the ground, and blood poured from his nose after a strong collision with Czech goalkeeper Tomas Vaslic.

And Cristiano Ronaldo decided, to complete the match normally, and refused to go out after putting a bandage on his nose to stop the bleeding.

Portugal raised its score to 10 points to rise to the top of Group B, while the Czech Republic’s balance froze at 4 points in the last place.