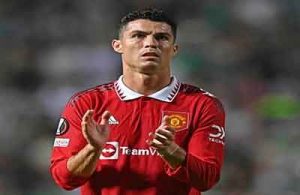 Manchester United ended the first half of the match against Everton, leading (2-1) at Goodison Park, in the tenth round of the English Premier League, today, Sunday.

Everton opened the scoring in the fifth minute through Alex Iwobi, and Anthony adjusted the result for Manchester United in the 15th minute, before Cristiano Ronaldo gave the Red Devils the advantage, adding the second goal in the 44th minute.

According to the “Squaka” network of statistics, Ronaldo reached his 700th goal in his professional career with clubs, with 450 goals with Real Madrid, 144 goals in the Manchester United shirt, 101 goals with Juventus, and 5 goals with Sporting Lisbon.

The “Don” managed to score in all the leagues in which he participated, over the last 20 seasons, starting from the 2002-2003 season.

It is noteworthy that Ronaldo’s goal today is his first in the Premier League this season, and he has previously scored only one goal in the European League.