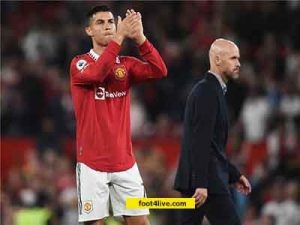 The Portuguese Cristiano Ronaldo, Manchester United star, sent a message to the Red Devils fans, after beating Liverpool 2-1, yesterday, Monday, in the third round of the Premier League.

Ronaldo posted, on his account on the “Instagram” network, a picture of him after the match, and wrote on it: “Well done .. Thank you for your support at Old Trafford.”

Several reports have claimed that Ronaldo wants to leave Manchester United, this summer, towards a club that participates in the Champions League.

It is noteworthy that Ronaldo remained on the bench in the match between Manchester United and Liverpool, and only participated in the 86th minute.

The Red Devils occupies the fourteenth place in the English Premier League table with only 3 points.

You may read : Manchester United regain their balance after beating Liverpool 2-1