Ronaldo: Today we saw a glimpse of the obstacles that will face us 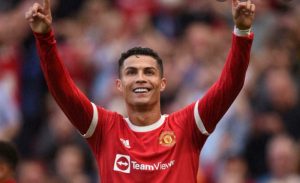 Ronaldo: Today we saw a glimpse of the obstacles

Manchester United star Cristiano Ronaldo sent a message to his teammates and fans, after the difficult victory over West Ham (2-1) on Sunday evening, in the fifth round of the English Premier League.

Ronaldo scored the first goal for his team in the meeting, which is the fourth goal he scored with United in all competitions, since his return to him from Juventus, after an absence of 12 years.

Ronaldo said on his account on “Facebook”: “Every game in the Premier League is a great fight for the three points. Today we were able to see glimpses of all the obstacles that we will find in our way, but we must keep our focus on our goals, together, strong. Focus, come on, devils.”

Manchester United raised its score to 13 points from 5 games, only two goals behind the leaders Liverpool and Chelsea.