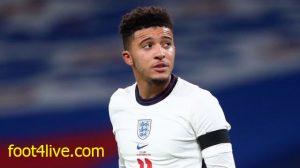 England and Ukraine announced their starting line-ups for their upcoming match on Saturday evening in the quarter-finals of the Euro 2020 tournament.

England coach Gareth Southgate surprised the critics, by including Jadon Sancho in the right wing position, in return for removing Bukayo Saka from the match list.

Mason Mount returned to the main formation of England after being away from the team in the last two games to isolate him due to his contact with his Chelsea teammate, who was infected with the Corona virus, Billy Gilmore.

Here are the two teams for this match: