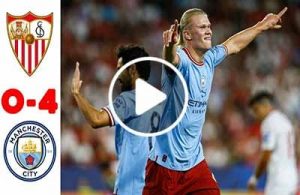 Manchester City humiliates Seville at home
Manchester City started its Champions League campaign with an easy victory over its host Seville (4-0), on Tuesday evening, in the Group G of the competition.

Erling Halland scored two goals in the 20th and 67th minutes, Phil Foden in the 58th minute and Robin Diaz in the 90+2 minute, at the Ramon Sanchez Pizjuan Stadium.

With this victory, Manchester City topped the group with 3 points, with a goal difference against Borussia Dortmund, who beat Copenhagen 3-0 earlier.

Manchester City coach Pep Guardiola relied on the method of play (4-3-3), as Manuel Akanji stood alongside Robin Diaz deep in the back line, with the support of full-backs Joao Cancelo and Sergio Gomez.

Rodri played the role of the center player in the Manchester City midfield, while Bernardo Silva and Kevin De Bruyne moved in front of him, behind the attacking trio, Phil Foden, Jack Grealish and Halland.

On the other hand, Seville coach Julen Lopetegui resorted to the method of play (4-4-2), where the back line consisted of Jose Carmona, Nemanja Godelli, Tanguy Kouassi and Alex Telles.

On the wings, Jesus Navas and Marcos Acuna were present, while Thomas Delaney and Ivan Rakitic were stationed in the middle of the field, and Isco collaborated with Alejandro Gomez in the front line.

Manchester City threatened their guest’s goal for the first time in the eighth minute, when Haaland followed De Bruyne’s cross with his head over the goal, and Cancelo’s shot rebounded from the defense in the 12th minute.

Grealish penetrated from the left side, before hitting the right side of the near post in the 13th minute, then Foden set the ball for De Bruyne, who threw it into the stands in the 15th minute.

City managed to open the scoring in the 20th minute, when De Bruyne sent a medium-high cross from the right, followed by Haaland without problems in the goal from close range.

De Bruyne took a direct free kick near the near post in the 30th minute, and a corner was kicked by Tellis from Grealish, before it reached Akuna, who shot away from the goal in the 32nd minute.

Halland picked up a through ball from Grealish, but Bono saved his easy attempt in the 38th minute, then Sevilla missed the opportunity to score when Delaney passed the ball to Gomez, but the latter shot away.

Juan Jordan and Ava Mir, instead of Delaney and Rakitic, entered the Seville squad at half-time, then De Bruyne received a pass from Haaland, who faced goalkeeper Bono, but the latter blocked his attempt.

And the Norwegian Erling Halland’s attempt passed away after a cross from Silva in the 50th minute, and then Sevilla involved a second striker, the Danish Kasper Dolberg, in the place of Telles.

And Manchester City was able to consolidate its lead in the 58th minute, when Cancelo passed the ball to Foden, who dodged before firing a crawl beyond the reach of Moroccan goalkeeper Yassine Bounou.

Sergio Gomez sent a special cross, Haaland tried to follow it, but he lost the way of the goal, but he scored the team’s third goal and the second for it in the 67th minute when he followed Foden’s shot into the empty net, which was saved by goalkeeper Bono.

Bono saved Palmer’s crawling shot in stoppage time, before Cancelo passed a ball in front of the goal, followed by his Portuguese compatriot Diaz quietly in the goal, to win Manchester City (4-0).