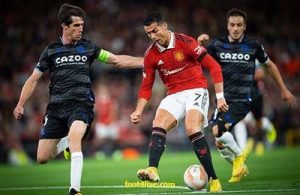 Manchester United suffered a surprise defeat at home to Real Sociedad 0-1 on Thursday evening, in the opening of its European League campaign.

Brice Mendes scored the game’s only goal from a penalty kick in the 59th minute.

And the first ten minutes of the match passed, without a real threat from both teams, until the 14th minute, when the ball reached Ronaldo inside the Sociedad penalty area, but Gurosabel cut the ball in front of him to be picked up by goalkeeper Remiro.

Eriksen raised a cross, which Ronaldo rose without reaching it in the 17th minute, and Ilanga skillfully passed his sergeant Gurusabel, before passing a ball inside the area to Fred, but Merino stood in front of the latter’s attempt in the 23rd minute.

Fred passed the ball to Eriksen on the outskirts of the penalty area, and the latter provided a pass to Ronaldo, who Pacheco cut the ball in front of him as he was about to shoot in the 25th minute.

On the other hand, Silva passed the ball to Mendes, who hit the right post of United’s goal in the 27th minute.

Dalot hit a unique cross to Ronaldo, who headed it into the net, but the referee’s banner canceled the goal due to the Portuguese star’s offside in the 35th minute.

And between the halves of the meeting, Bruno Fernandes and Lisandro Martinez entered the United squad instead of Eriksen and Dalot, and Ronaldo followed Ilanga’s pass to the goal over the bar in the 48th minute.

Sociedad responded in the 54th minute, when Munoz made a special cross from the left, substitute Sorloth rose to it without heading it into the net.

The referee awarded a penalty kick to Sociedad after using video technology, after a handball on Martinez, and Munoz executed the kick successfully in the 59th minute.

Fernandez passed on the right side, and Casemiro waited to send him a cross, but the latter followed it with his head, hitting the ground and over the crossbar in the 65th minute.

Jadon Sancho and Alejandro Garnacho entered the United squad instead of Anthony and Ilanga, and the Sociedad goalkeeper saved Casemiro’s shot after a pass from Fred in the 77th minute.

United continued their pressure, when Fred sent the ball inside the penalty area to Ronaldo, who followed it off the goal in the 85th minute.

Martinez went from the left, before finding Garnacho, who, in turn, fired a long-range shot that passed over the goal in the 88th minute, and in added time, goalkeeper Remiro controlled Casemiro’s low shot.