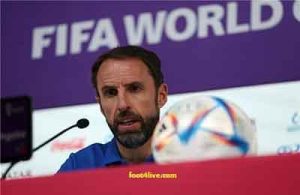 Gareth Southgate, England coach, confirmed that the confrontation with Senegal will be strong in World Cup 8th final.

Southgate said at the press conference: “The Senegalese national team is the African champion and was unlucky not to qualify for the 8th final of the 2018 edition.”

“There are many Senegalese players who have been in the English Premier League for years, including El Hadji Diouf,” the England coach confirmed.

He explained, “The Senegalese national team currently includes distinguished players who are present in the Premier League, and it is a wonderful thing that England has a strong tournament that attracts world talents.”

He stressed, “All players are ready to face Senegal, and there is full awareness of the capabilities of the African champion, especially since the opponent presented good levels in the tournament.”

He pointed out: “Mane is a wonderful player, but the Senegal national team presented good levels in his absence and showed a fighting spirit in light of his failure to join the World Cup, and the national team is now presenting good levels.”

The England coach stressed that the use of crosses and set pieces is very important, explaining that the Senegalese national team is distinguished at this point.

He explained that the England national team is ready to take part in a penalty shootout if the match reaches that stage, stressing that the players are training hard for it, but the team is looking for victory at the time of the match itself.

Southgate spoke about his defender Harry Maguire, stressing that he is a great player, but he was exposed to difficult circumstances due to the successive change of coaches and the way he plays in the ranks of Manchester United.

Gareth Southgate confirmed that Maguire is an important player for the England national team and has experience, but he was also affected by the injuries he suffered in addition to the criticism he received.

Southgate wished Aliou Cisse, coach of Senegal, to recover and join the match naturally, adding: “The match will not be easy, and I know that the public support will be greater for Senegal, but we will fight to reach the quarter-finals.”

And on the possibility of an Arab team winning the World Cup title, he pointed out that there are strong and distinguished levels presented by the Arab and Asian teams, explaining that the criterion in any match is giving within the green rectangle.