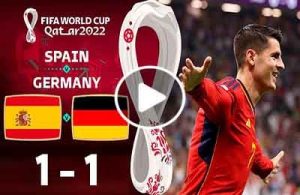 A positive tie was settled, with a score of (1-1), against Spain and Germany, at Al-Bayt Stadium, this evening, Sunday, in the second round of Group E, for the Qatar 2022 World Cup finals.

Alvaro Morata scored for Spain in the 62nd minute, while Niklas Volkrug scored Germany’s goal in the 83rd minute.

Thus, Germany, which lost in the first round against Japan (2-1), maintained its chances of qualifying for the round of 16 before facing Costa Rica (3 points) in the last round, while Spain plays against Japan (3 points).

The match started with pressure from Spain, and Dani Olmo received a cross on the edge of the penalty area, and hit a ball that was touched by German goalkeeper Manuel Neuer, before it hit the horizontal bar in the 6th minute.

Spain’s second attempt came in the 21st minute, with a missile shot from outside the penalty area by Jordi Alba, which hit the outer net of Manuel Neuer’s goal.

Germany’s first attempt to threaten Spain’s goal appeared, starting from Serge Gnabry and hitting a ball that passed by the right post of Unai Simon’s goal in the 24th minute.

And against the course of the match, Antonio Rudiger succeeded in scoring the goal for Germany, as he received a cross from a free kick, and scored with the head, but the referee canceled it for offside.

The surprises of the Germans continued, with another shot from Rudiger from the right side of the penalty area, which was blocked by goalkeeper Unai Simon twice in the 45th minute, so that the first half ended in a goalless draw.

With the start of the second half, the German national team almost scored the goal of progress, with a wrong pass from goalkeeper Unai Simon, which was snatched by German players before it reached Kimmich, who hit the goal, and Simon blocked the ball and turned it into a corner in the 56th minute.

Dani Olmo hit a powerful ball from outside the penalty area, which easily reached the arms of German goalkeeper Manuel Neuer in the 58th minute.

Substitute Alvaro Morata succeeded in scoring the goal for Spain in the 62nd minute, when he received a cross from the left side through his colleague Jordi Alba and hit the face of the foot in the net of Manuel Neuer.

Asensio missed the opportunity to add Spain’s second goal in the 64th minute, when he received a cross on the edge of the penalty area, but he shot with excessive force above Manuel Neuer’s goal.

Musiala missed the opportunity to score the equalizing goal for Germany in the 73rd minute, as he received a through pass to separate goalkeeper Unai Simon, but the latter brilliantly blocked his shot.

Substitute Niklas Volkrug managed to score the equalizer for Germany in the 83rd minute, taking advantage of Musiala’s dribbling inside the penalty area, and the ball hit him and hit Unai Simon’s net.

Attempts by the Germans continued to snatch the goal of victory, and in the last minute there was a close opportunity for Sani, who set out alone in which he dodged Unai Simon and sent a cross before it crossed the goal line, but Rodrigo pushed it away to a corner kick that ended after the match was executed.