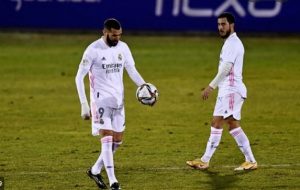 “The road has been very difficult, it is a dream to be here, and we are ready, and we will give everything we have.”

And about the best player in the world, Karim replied: “I am not the one who says that, and my challenge is to give my best every year with my team and always help it.”

“It is not possible to talk about age and the body is there, we work hard on and off the field, and we have a good team.”

On his approach to Marcelo’s 25 titles, he said: “It’s not in my head, but winning every title with the team, and the challenge is never personal, but I strive to help my team win always.”

“It is true that I scored many goals after Cristiano’s departure, but the way I played in his presence was different. He helped me a lot on and off the field. I know that I can do more, and when he left, I had to change my way of playing and my ambitions.”

On his replacement at Real Madrid, he commented:

“This is a question for the coach and the club president. There are a lot of players who can play in the attacking position.”

And about being the first captain of the team, he explained:

“I did not imagine this when I arrived at the club, I was 21 years old at the time, and it is a pride for my work since I was young, but nothing has changed.”

He concluded by talking about what he likes about his colleague Luka Modric:

“Everything, he is a player that I love, he knows how to play with one or two touches, and it is a pleasure to train with him… The only thing he has and I want is his external appearance.”

You may like to read: Germany striker Timo Werner returns to Leipzig