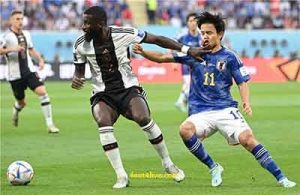 Japan’s national team achieved a surprising victory, turning the tables on Germany (2-1), today, Wednesday, in the first round of Group E in the 2022 World Cup.

The German national team advanced with a goal from the penalty mark in the 33rd minute through Ilkai Gundogan, before Japan came back with two goals in the 75th and 83rd minutes through Ritsu Doan and Takuma Asano.

Japan followed in the footsteps of its Asian neighbor, the Saudi national team, who overturned its deficit against Argentina to win 2-1.

With this result, Japan topped the group with 3 points, while Germany was bottom of the standings without points.

The Japanese national team was brave at the start of the match and surprised the Manshafts with some lightning attempts, most notably in the seventh minute with a cross that reached Kamada, who deposited the ball into the net, but the assistant referee pointed his flag to his presence in offside, to cancel the goal.

Kimmich had the first attempts at the Japanese goal with two shots, the most dangerous of which was from outside the penalty area, which was brilliantly saved by goalkeeper Gonda.

Kimmich sent a silk pass to Raum inside the penalty area, to elude the Japanese goalkeeper, who found nothing but obstruction, prompting the referee to award a penalty kick in favor of the Manshafts.

Gundogan rushed to execute the kick, to hit it perfectly into the net, scoring the first goal of the match.

Kimmich returned to practice his long shot hobby, but this time he missed the goal and the ball passed too far from the posts and the crossbar.

The Germans continued their attempts despite the progress, but this time with a shot high above the goal from Musiala’s feet.

A few seconds before the end of the first half, Kimmich fired a creeping shot, which was saved by the Japan goalkeeper, and it bounced back to Gnabry, who met it with a cross towards Havertz, to be deposited by the latter into the net.

The referee reviewed the goal shot with the video referees room, to decide to cancel it, after it became clear that Havertz was in offside the moment the ball left Gnabry’s foot.

The second half witnessed great excitement after the two teams exchanged threats with both goals.

Antonio Rudiger almost strengthened the Manchafts’ lead with a header, but the Japanese goalkeeper’s ingenuity prevented that, before the ball rebounded to the German defender, who shot it, but the Japan goalkeeper continued to defend his goal valiantly.

Manuel Neuer also stood in the way of some Japanese attacks, before he collapsed in the last quarter of an hour.

The Japanese battalion was able to catch Noir twice, the first through Ritsu Doan, who revived the samurai minutes before the end of the match.

After 8 minutes, Asano launched from the right, penetrating the penalty area of ​​​​the Manshafts, before putting the ball into the net from an impossible angle, which Neuer did not expect.

The German national team intensified its attacks in the last minutes, hoping to equalize, but all attempts failed.