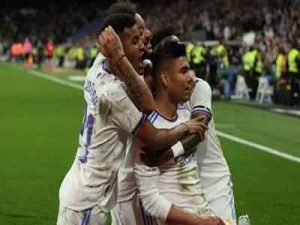 Manchester United entered the Premier League this season, poorly, receiving two losses in the first and second rounds, to be bottom of the table.

According to the Spanish newspaper, “Marca”, the miserable situation of Manchester United prompted club officials to try to bring in many new deals to restore the team’s prestige.

Manchester United have been linked with Alvaro Morata, Pierre-Emerick Aubameyang, Raul de Thomas and Matthews Konia to strengthen the attack line, in addition to Dutchman Frenkie de Jong to strengthen the midfield.

However, the newspaper confirmed that some Manchester United officials traveled to Spain, in order to negotiate with Real Madrid on the inclusion of Brazilian Casemiro.

The newspaper pointed out that Real Madrid prefers to keep Casemiro among its ranks because he is still playing regularly with coach Carlo Ancelotti.

The newspaper confirmed that Real Madrid has not received any official offers to join Casemiro so far, but the club’s philosophy is clear, which is that anything can happen until the last day of the Mercato.