Ten Hag: I will be Ronaldo’s friend and sometimes his mentor 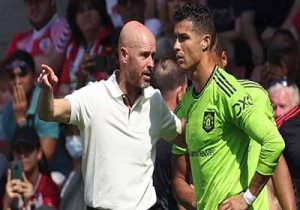 Manchester United coach Eric Ten Hag has spoken about Cristiano Ronaldo staying on the bench during the past matches.

Ten Hag said, in comments highlighted by the British newspaper “The Sun”: “As we all know, Ronaldo did not go through the preparatory season, and you cannot miss the preparation period… It is a rule for everything, especially the way we play.”

He added, “We play in a different way in football compared to last year. Collaboration, positioning and movement when you have or lose the ball, and fitness all depends on the pre-season.”

And Ten Hag continued: “I will be Ronaldo’s friend and sometimes I will be his mentor. It depends on the situation.”

Ten Hag also defended his policy of bringing many players from the Dutch league to the Premier League, saying: “First, the players we signed with from the Netherlands are international.”

And he added: “Secondly, they did really well in the Champions League, and thirdly, they also have individual skills that show that they are capable of playing football at the highest level.”

“Martinez is a good player with the ball, but you also see his defensive capabilities, his toughness, his positioning and his expectation,” the Dutch coach added.

He concluded: “I know what he (Martinez) can do for us. He is doing well but he has to do much better.”