The expected formation of Italy and Spain 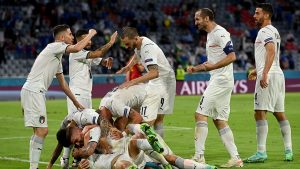 The striking force referees the expected formation of Italy and Spain

The semi-finals of the European Nations Cup “Euro 2020” will open today, Tuesday, with a fiery meeting between Italy and Spain, at Wembley Stadium, England.

The Azzurri qualified for this round at the expense of Belgium (2-1), while La Roja eliminated its Swiss counterpart on penalties.

According to the global “Ho Score” website, the match will witness a strong confrontation between Spanish striker Alvaro Morata, Italian defense duo Giorgio Chiellini and Leonardo Bonucci, where the trio will join forces with Juventus.

Italy coach Roberto Mancini will push Emerson Palmieri at left back, to replace the absence of Leonardo Spinazzola, who injured his Achilles tendon in front of Belgium and underwent surgery.

According to the “Ho Score” website, the expected line-up for the two teams for today’s match is as follows: