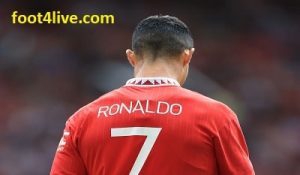 The future of Cristiano Ronaldo with Manchester United is close to an end!

Today, Tuesday, a press report revealed the latest developments regarding the future of Cristiano Ronaldo, the Manchester United star, during the current summer Mercato.

Ronaldo previously submitted a request to the management of his club to allow him to leave this summer, due to his desire to play with a team that participates in the European Champions League.

However, Manchester United coach Eric Ten Hag denied that Ronaldo had told him about this, and confirmed on more than one occasion that the Portuguese star continued at Old Trafford.

Fabrizio Romano, an expert on the transfer market in Europe, stressed that Ronaldo’s position has not changed, and he still wants to leave Manchester United this summer.

Romano indicated that Jorge Mendes, Ronaldo’s agent, is currently working on finding a way out for the player from Old Trafford.

He added, “There is still a possibility that Ronaldo will leave in the last hours of the Mercato, as happened last summer.”

“Manchester United insists that Ronaldo is not for sale, but Jorge Mendes continues to explore options.”

you may like to read: Manchester United transfer news: decided to take a step back!