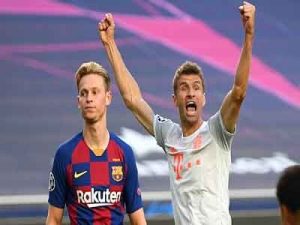 The Champions League draw ceremony, which was held on Thursday evening, resulted in fiery confrontations for Barcelona.

In the following report, Foot4live highlights the history of Barcelona’s confrontations against the teams of its group in the Champions League:

Barcelona does not have a good history during the European confrontations against Bayern Munich, where the two teams met 13 times, with 9 victories for the Bavarian, compared to Barcelona winning two games and a draw likewise.

The two teams also met last season in the group stage, and Bavarian won back and forth with the same score (3-0).

It is the most prominent match in the history of the two teams’ confrontations in the quarter-finals of the 2019-2020 season, which the Bavarian won 8-2, which caused the dismissal of the Blaugrana coach Kiki Sittin, and the departure of many players.

Barcelona faced Inter Milan in 14 matches before, and the Blaugrana won 8 times, while the Nerazzurri won two matches, and settled the tie in 4 matches.

Most of the confrontations between the two teams were in the group stage, and the beginning was in the 2002-2003 season, where Barcelona won the first leg 3-0, and settled a negative tie in the second leg.

As for the 2018-2019 season, Barcelona won the first leg with two goals without a response, and the return match ended in a 1-1 draw.

In the first leg, which was held in Spain, the Blaugrana won 2-0. As for the return match in the Czech Republic, Barca won a wide 4-0 victory.