The Lyon match decides the order of Neymar and Messi 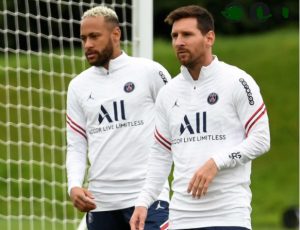 The Lyon match decides the order of Neymar and Messi

The Brazilian Neymar da Silva, the star of Paris Saint-Germain, scored a draw for his team against Lyon, at the Parc des Princes, today, Sunday, in the sixth round of the league competition.

Neymar scored a goal from the penalty mark, in the 66th minute, to equalize the score for his team, which was behind by another Brazilian Lucas Paqueta in the 54th minute.

Neymar went ahead to take the penalty, despite the presence of Argentine Lionel Messi, who is considered one of the most prominent shooters in the world, on the field.

It is worth noting that Messi was the first person responsible for executing penalty kicks in Barcelona, ​​​​even during the period of Neymar’s presence in the Catalan team from 2013 to 2017.

This topic occupied the sports street in Paris during the past few days, before it was resolved today, as it turned out that Neymar was the first to pay the penalty kicks.