The Netherlands reaches the Nations semi-finals at the Belgium expense 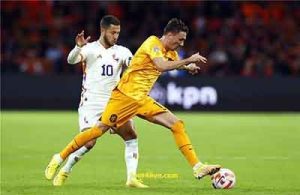 The Dutch national team reached the European Nations League semi-finals , defeating its Belgian guest (1-0), on Sunday evening, in the fourth group competitions of the first level of the tournament.

The Mills defender, Virgil van Dijk, scored the game’s only goal in the 73rd minute.

The Dutch team raised its score with this victory to 16 points, occupying the top of the group, 6 points behind the Belgian team, which is ranked second.

The first chance of the meeting came in the fourth minute, on the part of the Belgian team, when Awanana passed his sergeant Blind on the right, before passing to Hazard, who shot over the goal.

Jansen, the Dutch player, ran past defender Dipsat, in order to reach Ake’s pass, to pass in turn to the rushing Dumfries, whose ball strayed into the goal in the 31st minute.

The injury forced Bergwis to leave the Netherlands squad, to be replaced by Cody Jakbo in the 31st minute.

Onana got rid of Claassen, before firing a long-range projectile, which was stopped by the Dutch goalkeeper Pasfer, in the 37th minute.

The Dutch team threatened its guest’s goal, in the first minute of the second half, when goalkeeper Thibaut Courtois came out to clear the ball with his head, before it reached Dumfries.

A perfect through pass from De Bruyne reached Onana, who shot brilliantly, but veteran goalkeeper Psphere cleared the ball in the 67th minute.

Courtois also starred in keeping Bergwijn’s shot away, in the 72nd minute, but a minute later, the Dutch opened the scoring through Van Dijk, who headed a corner from Jacobo.

Bergwijn shook the Belgian net from outside, after a pass from Jacopo in the 76th minute, and Clasen did not succeed in taking advantage of his own goal by the Red Devils, in the 87th minute.

On the last exhale of overtime, a fairy scissor for the young Belgian substitute, Lukebakio, bounced from the left post, ending the match with a 1-0 victory for the Netherlands.