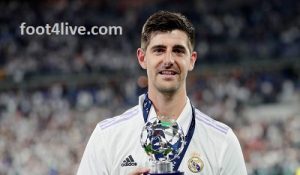 Thibaut Courtois “Real Madrid goalkeeper ” believes that his colleague Karim Benzema, the team’s striker, is deserving of winning the Ballon d’Or this year.

Thibaut Courtois said in a press statement after winning the European Super Cup by defeating Frankfurt,

“I am sure that Benzema will win the award, and if he does not win it, it will be because of a mistake in the vote.”  Germany, with two goals.

Courtois continued to praise his French colleague, “Karim always works very hard, the idea of ​​​​football is not only skills, but the physical factor is very important, to be the best.”

The Real Madrid goalkeeper concluded his statements, “Benzema is decisive in front of the goal.

He missed an opportunity in the first half, but he scored a goal in the second half when he had another chance.”

Do you think Karim Benzema will win the Golden Ball?