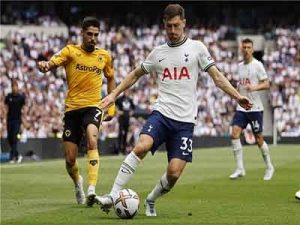 Tottenham beat Wolverhampton 1-0 in the match that brought the two teams together today, Saturday, in the third round of the English Premier League.

Tottenham owed this victory to Harry Kane, who scored the game’s only goal in the 64th minute.

Thus, Tottenham raised its score to 7 points, temporarily at the top of the standings, while Wolverhampton’s balance stopped at one point in 16th place.

The start of the match came at a mediocre level, and soon Tottenham took control of the match, and continued its offensive attempts in search of a goal to advance.

On the other hand, Wolverhampton relied on narrowing the spaces and launching counter-attacks whenever the opportunity presents itself.

Despite the offensive attempts of the two teams, they failed to pose any real danger to the two goals in the first minutes, limiting play to the midfield area.

The first attacking attempt came in the 20th minute, when Ruben Neves hit a powerful ball from outside the penalty area, but his ball went wide.

Play was confined to the center of the field again after this attack, with a relative advantage for the Tottenham team in terms of possession and control of the ball.

And Wolverhampton almost scored the goal in the 39th minute, when Goncalo Guedes hit a powerful ball, which was narrowly saved by Hugo Lloris, the Tottenham goalkeeper.

In the last minute of the original time of the first half, Tottenham almost opened the scoring when a cross was played from the left side, Harry Kane rose to it and met it with a header, but Wolverhampton goalkeeper Jose Sa turned it around with his fingertips for a corner kick that was not used, after which the referee blew the final whistle.

Tottenham intensified their attacking attempts at the beginning of the second half in search of a goal, forcing Wolverhampton to retreat to its midfield to absorb the enthusiasm of the opposing team’s players.

In the 51st minute, Tottenham almost opened the scoring when I played a cross from the right side, which Kane met with a neat header, but his ball hit the crossbar.

And the 63rd minute witnessed a dangerous opportunity for Tottenham, when Son Heung-min received the ball inside the penalty area, to hit a powerful ball that hit the left post.

In the 64th minute, Tottenham scored the goal after a corner kick that Ivan Perisic headed in and Harry Kane headed into the goal.

After the goal, Wolverhampton gave up their defensive caution and exchanged attacks with Tottenham in search of adjusting the result, at the same time, Tottenham retreated a little to their midfield and did not neglect the offensive side as well.

Ruben Neves almost scored the equalizer for Wolverhampton when he hit a powerful ball from a direct free kick, but it passed near the left post, ending the match with a 1-0 victory for Tottenham.