Tuchel about Marcos Alonso? his move to Barcelona! 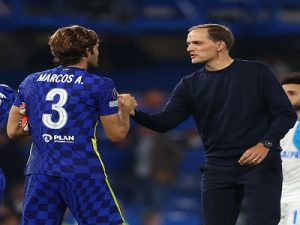 Tuchel about Marcos Alonso? his move to Barcelona in the next few hours.

Satisfied with his team’s 1-0 victory over Everton on Saturday evening at Goodison Park, in the first round of the English Premier League.

“The victory remains a victory, this is very important,” Tuchel said in statements to the BBC after the match.

Added: “There are things that need to be improved, but this is not a surprise.

I was happy most of the time in the first half, but in the second, we lost a lot of balls and did not control.

We struggled physically, but we showed the spirit to get a clean sheet.”

Continued, “There are situations that no one can influence, such as the big injury to the Everton player (Ben Godfrey)”

additionally, “the accident in the stands, and we corrected things after the confusion through the substitutions we made.”

Continued: “Things that could happen over the course of 4 weeks all happened in one meeting.

Tuchel revealed the position of left-back Marcos Alonso, regarding whether to stay in the team or not.

Amid speculation about his move to Barcelona in the next few hours.

“He is trying to leave and we agreed to that, bringing him on the field today would not make sense,” he said.

On the other hand, Tuchel spoke about his veteran Brazilian defender Thiago Silva, saying:

“All our three players are in the back in their thirties, and we suffered in general at the end ”

He concluded, “We need to improve our physical level and we are working on that”

“Thiago is a key player in the center of defense now, but we need to run and move more on the ball”

You may like to read: Marko Arnautovic to Manchester united news!