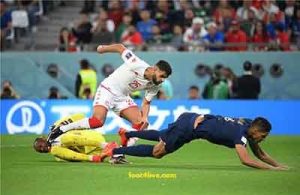 Tunisia left the World Cup competitions with historic and honorable victory (1-0) against France, defending the champion, this evening, Wednesday, in Group D competitions.

Wahbi Khazri scored the only goal of the match in the 58th minute.

The Carthage Eagles raised their tally to 4 points in third place, but the victory was not enough to qualify them for the second round, after Australia won 1-0 over Denmark.

The French national team froze at 6 points to qualify in the lead, ahead of Australia, by goal difference, while the Denmark national team bottomed the standings with one point.

Didier Deschamps, coach of the French national team, pushed him into the second row, where he made several changes to the starting line-up, and changed the positions of some players, such as Camavinga, who participated as a left-back.

Tunisia coach Jalal Kadri followed the same approach, with some modifications to the basic formation, seeking to take an offensive risk to achieve a victory that would compete with him to qualify for the second round.

The Tunisian national team was the best and most active on the French goal, as Nader Al-Ghandari scored a goal against Mandanda after 8 minutes had passed, but the referee canceled it for offside.

The Carthage Eagles pressed hard, as Ali Maaloul and Wajdi Kashrida were active, but the spearhead, Anis bin Suleiman, was not vigilant in exploiting opportunities.

As for the closest attempts, it was a powerful shot from Wahbi Khazri, which was blocked by French goalkeeper Steve Mandanda.

On the other hand, the attacking trio of Duke Kingsley Coman, Kolo Mwani and Verito did not appear, as Tunisian goalkeeper Ayman Dahman was not subjected to tests throughout the first half.

And the Tunisian national team continued, with strong pressure at the beginning of the second half, as Issa Al-Aidouni hit a ball over the crossbar.

The Carthage Eagles translated the advantage and control with a wonderful goal scored by Wahbi Al-Khazri, after which he went out to replace Issam Al-Jabali.

Deschamps, the rooster coach, moved to dust off his team with three substitutions at once, as Kylian Mbappe, Rabio and Saliba participated in the place of Koeman, Verito and Varane, then Griezmann and Osman Dembele in the place of Youssef Fofana and Guendouzi.

And with the pride of the world champion, the French team pressed with all force to equalize, as goalkeeper Ayman Dahman saved three dangerous attempts from Osman Dembele and Kylian Mbappe, and Rabiot and Colo Mwani hit the post.

Ghilan Al-Shaalali and Ali Al-Abdi participated in the place of Muhammad Ali Bin Ramadan and Anis Bin Suleiman, in an attempt by the Tunisian coach to revitalize the ranks.

The referee awarded 8 minutes of stoppage time, as Dahman saved a new attempt from Mbappe.

Griezmann hit the net with a fatal goal in the last second, but video technology canceled the goal, giving the Tunisians a historic and honorable victory.