USA imposes a tie vs England and ignites the qualification struggle 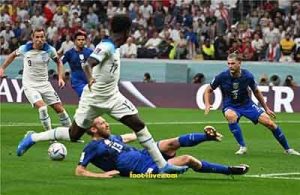 The England national team was unable to qualify for the final price, drawing with the United States (0-0) on Friday evening at Al Bayt Stadium, in the World Cup Qatar 2022, second round of Group Two .

Despite the tie, England remained top of the group with 4 points, one point ahead of Iran, who beat Wales (2-0), while the US team settled in third place with two points.

England coach Gareth Southgate used the 4-3-3 method, and did not make any changes to his squad, which won the first match against Iran 6-2.

John Stones stood next to Harry Maguire in the depths of the back line, with the support of the full-backs Kieran Trippier and Luke Shaw, and Declan Rice played the role of the pivot player, with the support of Judd Bellingham, while Mason Mount moved behind the attacking trio of Bukayo Saka, Raheem Sterling and Harry Kane.

On the opposite side, United States coach Greg Berhalter resorted to the 4-3-3 method, where the back line consisted of Sergino Dest, Walker Zimmermann, Tim Rimm and Anthony Robinson, and the trio Tyler Adams, Younis Musa and Weston McKinney exchanged roles in the middle of the field, while he played Wings Hagi Wright and Christian Pulisic, center forward Timothy Weah.

The start of the match was slow, and it did not witness chances in the full sense of the word, until the tenth minute, when Saka got the ball from the right side, to pass in front of the goal to Kane, whose attempt rebounded from the defense.

The American team waited until the 17th minute to threaten its opponent, when Hagi met Dest’s cross with his head, so that his attempt went far from the near post.

And the American team almost opened the scoring in the 26th minute, when McKinney followed up with one touch, a low cross from the right, over the English goal, and three minutes later, Moses fired a long-range shot into the hands of English goalkeeper Jordan Pickford.

The most dangerous opportunity in the first half came in the 33rd minute, when Pulisic got the ball on the left side of the England penalty area, and fired a surprise shot that bounced off the crossbar.

Dest penetrated from the right, before his attempt bounced off the defense in the 41st minute, and the same player raised a cross, followed by Pulisic with a weak header next to the far post in the 43rd minute.

The England team woke up at the end of the half, and Shaw made his way from the left side, before passing to Saka, who followed the ball from a difficult position away from the goal in the last minute.

And in stoppage time, Sterling passed a smart ball to Mount, who shot it low and was saved by American goalkeeper Matt Turner.

After 4 minutes into the second half, McKinney tried his luck with a shot from outside the penalty area, which settled in the stands.

The American team maintained its advantage, but all its attempts from set pieces were cut off by defender Maguire, and an American corner kick almost deceived goalkeeper Pickford in the 63rd minute.

The English national team made two substitutions at once, as Bellingham and Sterling left, and Jordan Henderson and Jack Grealish entered their place, then Bukayo Saka followed them, who gave way to Marcus Rashford.

Nothing new happened with the substitutions, and the two teams tended to be cautious as the last quarter of an hour entered the match, and no shots were directed at the two goals until the 87th minute, when Rashford hit where the goalkeeper was standing.

The England national team came close to winning the match in injury time, but Kane’s header went wide after he followed up on a free kick.