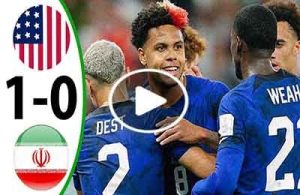 America’s only goal was scored by Christian Pulisic in the 38th minute.

With that result, America raised its score to 5 points, in second place, behind leaders England with 7 points, while Iran’s balance was frozen at 3 points, to bid farewell to the tournament from the first round.

The United States posed the first danger in the match in the 9th minute, with a shot from Younis Musa from the edge of the area that went wide of the goal.

Pulisic rose to the cross in the 11th minute, hitting a weak header that went easily into the hands of Iranian goalkeeper Ali Reza Beranvand.

America returned to try in the 28th minute, after Joshua Sargent hit a ball from the border of the area, which collided with Iran’s defense, and Timothy Weah followed it up with a header that was blocked by Iran’s goalkeeper.

Sargent then paved the ball for Loyah again inside the area in the 33rd minute, and the latter hit a powerful ball that went over the crossbar.

The United States opened the scoring in the 38th minute, after Dest sent a magic pass with the head inside the 6-yard area, followed by Pulisic with a direct shot that hit the net.

And America searched for adding the second goal in the 42nd minute, by receiving a longitudinal through Sargent on the right side of the penalty area, after which he hit a powerful ground ball, which went far from the goal, to end the first half with America’s lead (1-0).

America started the second half with a ground shot from Sargent from inside the penalty area in the 47th minute, which was caught twice by Iran’s goalkeeper.

Iran appeared offensively for the first time in the match in the 52nd minute, with substitute Saman Qudous following up a cross, hitting a header over the crossbar.

Iran missed a real opportunity to adjust in the 65th minute, after Ali Gulzadeh passed a magic ball to Quddous inside the area, and the latter hit a ball that passed just past the post.
And America got a violation at the borders of the region in the 69th minute, which Younis Musa executed with a direct shot over the crossbar.

Iran tried to adjust in the 70th minute, with a shot from outside the area through Saeed Ezzat Allah, which went over the crossbar.

In the 82nd minute, substitute Mahdi Turabi followed a cross from a foul, hitting a weak ball from inside the area, which was caught by American goalkeeper Matt Turner.

Iran almost equalized the score in the 90 + 3 minute, with Murtaza Pourali Kanji following up a cross from a foul, and he hit a header that passed just past the post, so the match ended with America winning (1-0) and qualifying for the final price, to face the Netherlands in the next round.