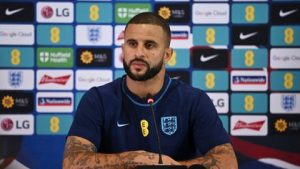 Present at a press conference three days before the France vs England quarter-final, Kyle Walker dealt extensively and broadly with the subject Kylian Mbappé. Brought to defend on the star of the Blues, the right side defender (or central) of the Three Lions says he is aware of the danger but ready to take up the challenge, while insisting on the other threats represented by France.

In the press conference room, he knew it was going to be good, and he was not disappointed. In the World Cup quarter-final between England and France in three days, Kyle Walker will face Kylian Mbappé for the first time. A match within a match that somehow fascinates observers, In this competition, the Manchester City defender appears to have the best ability to resist the tricolor striker (especially in speed). Despite his apparent confidence, the individual did not parade while recognizing the magnitude of the task ahead.

“He’s a great player in great form, so it’s not going to be easy. But as a professional you want to play against the best in the world and he’s one of them. Of course I understand that this duel draws attention “And I understand what I have to do to stop him. It’s easier said than done but I don’t underestimate myself. I’ve faced some of the best players in the world, but I have to approach this quarter by telling me that it’s a match like any other. You have to respect Mbappé, but not too much, “he said.

the last time in the champions league, i had hard life for him

So Walker assures him, he’s not shaking. He is even eager to fight it out. And for good reason, Saturday, the English right side will not go into the unknown, as was particularly the case for the Polish vis-à-vis Mbappé in the round of 16. Recently, he has already encountered the phenomenon during the Champions League match between Manchester City and PSG and muzzled him quite well, especially in the group stage last year at the Etihad Stadium (victory 2- 1 for Citizens).

“Of course having played against him a few times will help me. The last time in the Champions League, I gave him a hard time. I know he’s a cador but we don’t play in the Champions League. tennis. There is no individual in it, it’s a team sport. A team is more than just one person, so it will be a tough game. I’m not going to roll out the red carpet for him and tell him to score It’s a World Cup: make or break. I’m not going to go home,” he insisted.

He’s a great Footballer, but we can’t underestimate others

Still, the system used during this quarter-final by Gareth Southgate will say a lot about the fear inspired by the Blues striker. Walker could thus evolve in a central defense at three, on the right side, covering Keiran Trippier who would act as a right piston, just to take Mbappé at two. “I don’t think it changes much, however, nuanced Walker. Whether it’s Manchester City or with the England team, I don’t project myself as much forward as I did at Tottenham. “It’s all about reading the game well and adapting. I do what the manager asks.”

After yet another question about the prodigy of the Blues, Walker ended up getting annoyed straight in his boots. For the record to be set straight, he finally realized that the danger could come from anywhere.

“When we played PSG in the Champions League, we weren’t just thinking of Mbappé and it will be the same on Saturday. He’s an asset in their arsenal – and a very good one – but you can’t underestimate their other players We know he’s a great player and that’s why all questions focus on him. We should also remember Olivier Giroud, Ousmane Dembélé, and Antoine Griezmann, who scored a lot of goals. I believe all questions should not be about Mbappé. Yes, I am aware that he is a great footballer, but there are others too.”