Will Messi catch up with France’s Clasico? 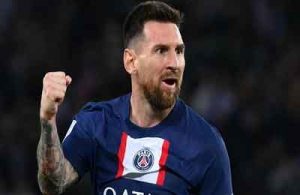 Paris Saint-Germain coach Christophe Galtier has decided the Messi’s chances for catching up with Clasico match against Olympique Marseille in the Ligue 1 .

Galtier said in a press conference on Monday “With a large percentage, Messi will be ready for the Marseille match,” .

He added that Lionel Messi had thought that he would join Benfica’s match on Tuesday in the Champions League.

However, the coach added, “But time was very tight, and he did not completely get rid of the pain of his muscle injury, so I decided to exclude him to recover fully.”

Messi was injured in the Benfica match last Wednesday, with a strain in the calf muscle, to miss two consecutive matches against Reims last Saturday, and then Benfica on Tuesday.

Paris Saint-Germain will play Olympique Marseille, next Sunday, in the top of the 11th round of the French League.