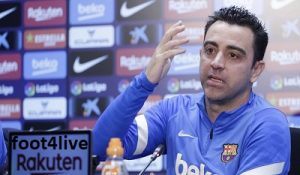 Barcelona coach Xavi expressed his satisfaction with the level of Bosnian Miralem Pjanic, indicating his continuation in the ranks of the Catalan giant, despite the many doubts that hovered over his future.

Xavi spoke in statements to the newspaper “Marca” about the newcomer, Rafinha, saying:

moreover, He may look like Neymar, but he has shots similar to Rivaldo. Lots of ingredients.”

“He is an exceptional scorer and player who is able to make the difference in the penalty area. He gives us everything in the attack line. I think we took a step forward by forming this team. He came to us with great desire, hunger and humility to work.”

“He came to talk to me 3 weeks ago and I told him that I wanted him to continue and that I admired him, but he insisted on his desire to leave”.

He added: “Nico told me that he had found a team that he believed would participate with him, it was a good loan, he is brave and I wish him the best, it will be That is important for Barcelona’s future, and given Miralem Pjanic, I am convinced of him, and he will continue with us.”

Xavi commented on the impact of the World Cup on the season: “We planned for a holiday in the middle of the season. There will be a preparation period for those who will not participate in the World Cup. We will prepare very well and during the international break we will not stop.”

You may like to watch today’s Matches at foot4live.com