Xavi: It’s a blessing to have Lewandowski 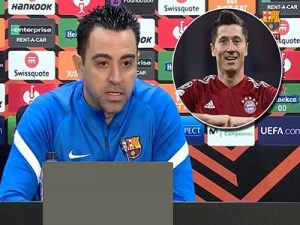 Barcelona coach Xavi Hernandez expressed his happiness with the wide victory (4-0) during the match against Real Valladolid, on Sunday evening, in the third round of La Liga.

Xavi said, in comments reported by the Spanish newspaper “Sport”: “Lewandowski is happy, feels comfortable and wants to make a difference. Regardless of his goals, he generates for us a lot in attack and talks a lot with young people. He is a natural leader, it is a blessing to be in the group. He has tremendous humility. “.

On his reliance on Baldi, he revealed: “He plays because he does it very well, he had a great preparatory period and he deserves it as he has a great personality, he has strength, he is good at dribbling, he can play on the wing and he can help us a lot. He is an amazing young man.”

He added, “But there will also be times for Jordi Alba and Pique. We will need to take turns and competing with the youth will make Pique and Alba better.”

He concluded: “They are the leaders and encourage the dressing room, and they accept this situation with humility and they must change it without a doubt.”