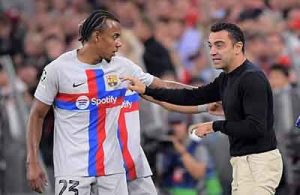 Barca defender Jules Conde suffered an injury in the France-Austria match in the European Nations League, threatening his participation in the Clasico match against Real Madrid, on October 16.

And the situation was made worse by the statement of France coach Didier Deschamps, on the French channel L’Equipe, that Ousmane Dembele was training alone before facing Denmark, tomorrow, Sunday, because of the player’s complaint of muscle pain.

Deschamps also spoke at the meeting’s press conference about Antoine Griezmann, stressing that he is in a good technical and mental condition despite his participation for a few minutes with Atletico Madrid since the beginning of the current season.

He continued, “Alphonse Areola, he will be the goalkeeper of the French national team against Denmark, he is with us because of his capabilities, and there are guards in other teams who do not participate primarily with their clubs, and every time he participates in matches he performs distinctly, because he is a good goalkeeper, and I trust him a lot.”

The roosters coach added. “I have plenty of time to think about choosing 26 players for France’s World Cup squad,”

Deschamps said, “Christian Eriksen is an outstanding player, but the entire Denmark team is a strong and fierce team, and they are competing to qualify for the Nations League semi-finals, so it will be an important confrontation in our preparation for the World Cup.”