Xavi: We cannot work in peace.. Casemiro’s departure is a loss for Real Madrid 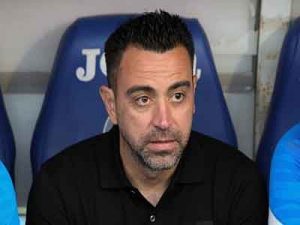 Barcelona coach Xavi Hernandez praised his rival Real Sociedad before the two teams meet tomorrow, Sunday, in the second round of La Liga.

Xavi said, during the match press conference: “Real Sociedad is a competitor that does a lot of things well. They have a lot of talent in the midfield, players who have speed in attack, they are also physically strong, and they have a strong goalkeeper.”

Regarding Jules Conde’s position on the score, he replied: “We are waiting.. We still have many matches, and we are ready to score it at any time.”

He explained that he would not announce the Sociedad match list before tomorrow, pending the possibility of any moves that might allow the French player to register.

He added: “Aubameyang? The market ends on August 31, and we’ll see what happens.. I’m counting on him, and tomorrow he will be an important player.. But we’ll see how things go.”

And on the possibility of including an alternative striker, he said: “We will evaluate things. Aubameyang or Memphis Depay has not left yet.. Tomorrow we will be able to rely on them, and the priority now is to register Conde.”

Xavi does not rely on right-back Serginio Dest, who missed the first match against Rayo Vallecano, noting that the player “already knows his situation” in the team.

And then he did not rule out resorting to the Mercato, to strengthen the right sector of the defense, explaining that it relies on: Sergi Roberto, Ronald Araujo and Jules Conde, in this position.

On Busquets’ replacement, who was absent from the match for expulsion, he replied: “Tomorrow we will see, we have players like Casey, Frenkie de Jong, and Pjanic. We have a large and diverse team, and tomorrow we will decide.”

Regarding Casemiro, Xavi said: “He is a player who represents a stage in Real Madrid, and the club has signed players to replace him. His departure is an important loss for them. He has achieved many titles, and has been essential during the past decade.”

He continued: “Ferran Torres is a very good player, and he should be an essential part (of the team) for us. The sad thing is that he was not able to start at the same pace as his teammates, but he will definitely participate.”

And he added: “The draw in the first round against Rayo Vallecano is a disgrace, but it is just the beginning.”

Regarding my country, he explained: “I rely on him, and I think he can compete with Jordi Alba.”

On the Mercato, Xavi said: “The market must end when the leagues start, we do not work in peace and the market continues, as it is preparing for a match with a player who can leave .. This is not the ideal scenario.”

And about Conde, he replied: “I see him well.. He is a natural leader, and a great deal for us, and we are waiting for him to register to participate with us.”

Regarding De Jong, he commented: “I see him as an attacking midfielder, but he can play in the axis as well… He is a wonderful and strong player, and he perfectly reaches the opponent’s area.”

The Spanish coach concluded: “I admire him a lot, and he can get used to playing in several positions, but I do not see him as a full-back (laughs).”