Xavi: We want to write a new history against Bayern Munich 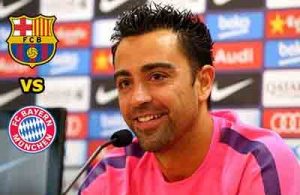 Barcelona coach Xavi Hernandez confirmed that his team strives to win against Bayern Munich, tomorrow, Wednesday, in the second round of the Champions League group stage .

Xavi said during a press conference on Monday “I think we have a lot of expectations this season, and tomorrow’s result will not change anything, but it is true that we have a challenge to win here, in a stadium where we have never won,”

He added: “We have worked together for 10 months, and we have the feeling and the challenge that we can win this match, and we will play against one of the best teams in the world and tomorrow we want to win, and it’s only 3 points.”

He continued, “We will have to do another preparatory season after the World Cup, where we will lose a number of players with their national teams.”

On Bayern coach Nagelsmann, he commented: “He is one of the top coaches, and very good at many things, but a big club the size of Bayern Munich is very demanding.”

He added: “It will be a very intense match, and we both want to control the ball, and we will try to control more.”

Lewandowski said: “He is good and very enthusiastic, and he took a rest in the last round, and I think it will be a special match for him, and we will try to show our personality and beat one of the best teams in the world.”

And he continued: “Rafinha for me is a very important player, he works a lot for the team, and I have great confidence in him, and tomorrow will be important.”

And he added: “Muller is a great player, and he has been making the difference for many years now, and he understands the game well, and we do not do individual observation, and we have to be vigilant for all Bayern Munich players.”

And what changed from last season, he concluded: “I think we changed our mentality, we gained character, and certainly deals added quality to the team.”