Xavi: We were better than Bayern… and the loss is a back step 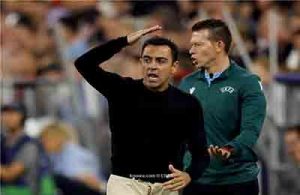 Barcelona coach Xavi expressed his anger at the 0-2 loss against Bayern Munich, in the second round of Champions League group stage .

“When you miss goals in the Champions League, you end up receiving goals in your net,” Xavi said in comments reported by Marca newspaper.

“We were better than Bayern Munich, and we missed chances, but they didn’t waste and scored.”

He added, “I think we played well, and the first half was ours, the result does not reflect the performance.”

He noted, “We must maintain our positive things, the result is completely negative, we have to learn from our mistakes, but today’s loss is a step back, the defeat is not deserved, but it is because of our mistakes.”

And he finished, “The penalty kick? I didn’t see it, everyone told me about it, but in the end the referee did not award it.”