Zlatan Ibrahimović renewed the contract for a one-year 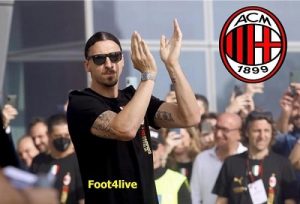 Zlatan Ibrahimović renewed the contract for a one-year at AC Milan for another year, despite facing a lengthy rehabilitation period after knee surgery.

What happened forced Ibrahimovic to undergo planned surgery on his left knee at the end of May.

It’s likely that the 40-year-old will not return to full fitness until midway through the season in 2022-23 after being out for up to eight months.

Despite this, AC Milan announced on Monday that the veteran Swede is set to extend his stay at the San Siro.

Ac Milan won the Serie A title for the first time in 11 years last season with eight goals.

according to a statement from the club:

Zlatan Ibrahimović signed a new contract at AC Milan has been renewed until June 30, 2023.

“The number 11 shirt will remain with the Swedish forward.”

Taking to his Instagram page to respond to the announcement, Ibrahimovic wrote: “The never-ending Zlatan #ReadyToLeaveAMark”.

what do you think about the renewal of Ibrahimovic’s contract for another one-year?

Do you think AC Milan still in need of Zlatan? Leave your comment in the section below!

Read about Liwandowski to Barcelona